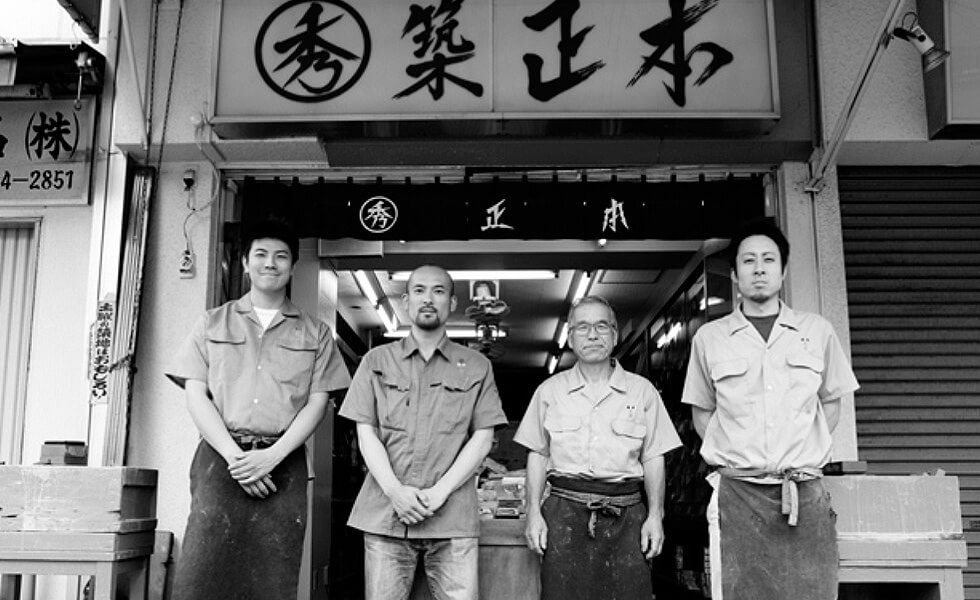 Carbon Steel
Carbon steel knives offer the advantage of increased durability and sharpness at the expense of requiring more general maintenance. NA Sales carries Tsukiji Masamoto knives that are composed of the following varieties of steel.

SK Steels – An affordable option for those considering a high carbon knife. Overall these contain less carbon than white or blue steel. SK steels also contain a higher amount of impurities such as phosphorus and sulfur compared to white or blue steel, which reduce the overall toughness of the blade. In any case, SK steel knives are still high performance tools and can produce exceptional results.

White Steel (#3, #2, #1) – Much more pure than SK steels with a minimal amount of impurities and a higher carbon count. #3 has the least carbon content and is not as hard, but is more resilient to cracking and chipping. #1 has the most carbon and can hold the sharpest edge, at the expense of being more brittle.

Blue Steel (#2, #1) – Contains the same amount of carbon as its white counterparts, but has chromium and tungsten added in order to increase corrosion resistance and edge retention. However, this makes the blade more difficult to sharpen and will not take as sharp as an edge as a white steel.

Which is better, white or blue steel?
Simply put, there is no correct answer. For those looking for a premium Japanese knife on a budget, SK steel knives offer high performance at a more affordable price point. Those who really wish to indulge and are looking for the absolute pinnacle of Japanese knives should opt for a white or blue steel knife. Depending on user application, one may prefer the sharp white #1, while another prefers the lower maintenance blue #2.

However, these blades will lose their characteristic sharpness if the proper care is not exercised. The knives must be handled with care to avoid unnecessary damages and must be washed and dried to avoid rust and corrosion. Proper sharpening methods must be used to keep the blade at its highest potential.

Kataba – The single beveled knife
One of the most distinctive characteristics of Japanese knives are the single beveled edge (kataba). Unlike Western knives which have both sides of the knife beveled, Japanese knives often have a flat side and a beveled side. This allows for greater precision in slicing and allows for clean presentation where a Western knife would struggle.

Knife Shapes
Yanagiba – A long, slender knife with a pointed tip originating from the Kansai region of Japan. Primarily used for slicing sashimi. The length of the blade allows for the chef to make one smooth continuous slice.

Takohiki – Similar to the yanagiba, but does not have a pointed tip. Originates from the Kanto region of Japan.

Deba – A heavy-weight knife with an enlarged spine. Often used to behead fish without damaging the end product. Primarily used for cutting through small bones or tough sections of meats and vegetables. However, the deba is not designed to cut through thick sections of bones.

Usuba – A thin knife used primarily for delicate tasks on vegetables such as chopping, peeling, or julienning.

Mukimono – A peeling knife with a sharp pointed tip that is useful for detail work or creating intricate designs.

Gyuto – The closest equivalent to a Western chef’s knife, but is sharper and thinner. Unlike other Japanese knives, gyutos are also usually double beveled.

Honesuki – A boning knife with a unique shape designed to separate bone and meat. Unlike some other Western designs, the honesuki is rigid and will not bend.

Santoku – Literally translating to “three uses,” the santoku is a all purpose knife similar to the gyuto. Unlike the gyuto however, the santoku has a flatter edge and is generally shorter in length.

Knife Styles
Honyaki – These knives are forged from a single piece of steel under high temperatures and result in an extremely hard and sharp blade. Consequently, these knives are more difficult to sharpen and are more prone to chipping or cracking if handled improperly.

Kasumi – Unlike a Honyaki knife, carbon steel (hagane) and softer iron (jigane) are forged together to create a single blade. The soft iron becomes the body of the knife, while the steel becomes the edge. Kasumi knives are easier to sharpen and are not as delicate as Honyaki knives, but do not keep and hold as sharp an edge. These knives are generally easier to maintain and are more forgiving when handled improperly. Depending on the type of steel used, Tsukiji Masamoto knives are graded as either Namikasumi or Honkasumi.

Kyomen – Kyomen, which translates to “mirror finish,” refers to the additional polishing step some knives undergo. The knife is polished to a brilliant finish, which greatly enhances the visual appeal of knife work. Great for chefs who showcase their abilities in front of customers. Please note that to maintain the mirror finish, Kyomen knives should be polished with a Kyomen Shokunin polish to avoid scratching the surface.

How to sharpen Your knives and Tools

Soak the whetstone in the water before use.
(about 5 minutes)
For safety sharpening of the blade, hold the stone in a wet cloth or otherwise secure as preferred.

SHAPE OF BLADES AND HOW TO SHARPEN THEM:

Maintain an angle to the stone while moving the blade over the stone.
After 3 or 4 strokes, flip blade and repeat process on other side.
Alternate equal strokes until sharp. 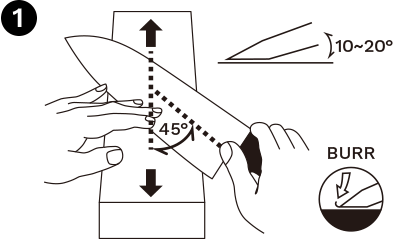 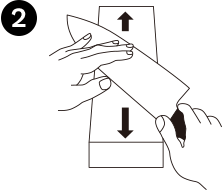 When finished one side edge, then turn the blade and set on the stone and repeat the process alternatively. 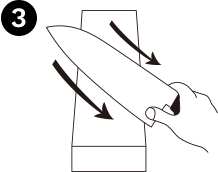 When removing burr, set the blade flat on the stone and scrape blade edge lightly to the arrow direction.

After use the whetstone, rinse it and wipe off the residue. Store it protected from direct sunlight.
If a worn stone surface has become concave, it can be corrected using a dressing stone or water-proof sand paper.

When sharpening, handle blade carefully to avoid any injury. Make sure the sharpening stone does not remain soaked after use.